Warning: Declaration of Struts_Option_Select::customizer_control_options($setting_name, $priority) should be compatible with Struts_Option::customizer_control_options($setting_name, $priority = 1000) in /home/or0slsffb2ao/domains/callthejam.com/html/wp-content/themes/duet/includes/struts/classes/struts/option/select.php on line 0
 On transferring leagues and other derby happenings | Call the Jam

On transferring leagues and other derby happenings

Things that happened in the last six months or so:

One of my prior Call the Jam posts was published in the new book Derby Life: A Crash Course in the Incredible Sport of Roller Derby, which is both super duper cool and also made me feel super duper guilty about not writing more here in recent months. Each of the above bullets could probably be a post in itself (well, the hand debacle got some love), but I think it’s been my difficulty writing about the first thing that has probably been the most responsible for my silence.

Part of it is the challenge of explaining difficult decisions that were made before a cross-town league transfer. Any of you who have done this probably knows it’s impossible to make such a move without at least a little heartache. And then almost immediately breaking my hand? You can’t help but wonder if the universe is trying to send you a message. I can say that one of my reasons for leaving my league of five years behind was because I wanted to be a student of roller derby again. I needed to be, otherwise I was headed for retirement and the frightening and ungodly amount of free time I’m sure I’ll have whenever I leave derby for good. 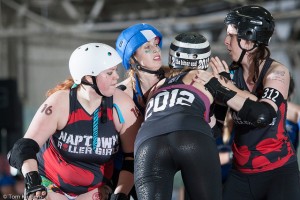 So, I got my wish. I’m a student of derby again, one of the skating masses, with no leadership responsibilities, no veteran status. It’s liberating … and humbling. Concepts like “has good footwork” and “demonstrates stellar track awareness” crumble in the face of new contexts. I have had a hard time finding my groove with my injuries, with playing different positions, with navigating a new social landscape. Even just learning the online forums, policies and requirements, and of course the culture of a new league can be daunting. Props to all you transfers out there!

It took me a few years to feel comfortable writing about derby in the first place. I had to develop a small feeling of authority in my thoughts, observations and emotions vis a vis the sport. I lost that when I started with a new league. I’m almost starting from scratch again. And it’s exactly where I wanted to be, though the collateral loss was some of that authority and confidence. No regrets, absolutely no regrets at all. But I have to remember that, no matter the circumstance, I still have authority in my own experiences and feelings, as everyone does. And I should at least try to write about them. Because that’s what I do.