Warning: Declaration of Struts_Option_Select::customizer_control_options($setting_name, $priority) should be compatible with Struts_Option::customizer_control_options($setting_name, $priority = 1000) in /nfs/c04/h01/mnt/60107/domains/callthejam.com/html/wp-content/themes/duet/includes/struts/classes/struts/option/select.php on line 42
 A final requiem for a broken hand | Call the Jam

A final requiem for a broken hand

Everything is harder when you’re broken. A lot of you probably know this. It took me more than five years in derby to break myself. So I count myself lucky. I went a long time and it could have been worse. I have health insurance, an understanding employer, friends and loved ones willing to help. But that doesn’t mean a setback didn’t take its toll.

Showering, getting dressed, fixing your hair, preparing a meal, washing dishes, driving, typing, writing, tying your shoes, sending a text message, sleeping, cleaning, doing anything involving water, exercising, getting the lid off a prescription bottle, filling out a form of any kind, scraping ice off your car … these are among the practical things that become difficult when you break your hand.

Just getting through some days was hard. Doing my job, which is normally not physically taxing, was hard. Anything beyond that and keeping up with 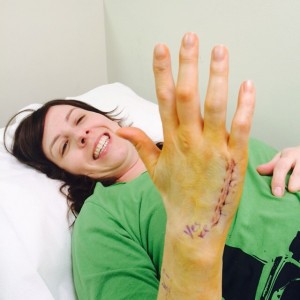 I’m smiling here, but it wasn’t that fun.

doctor’s appointments was mostly put on hold due to a lack of extra mental energy to spread around. Your life kind of shrinks around the injury.

To put a cherry on top of the shit sundae of just being broken, I missed my first bout with my new team and I got sick a couple of times while recovering from surgery, including a gnarly bout of food poisoning. It appeared 2015 thought it was going to kick my ass. But it won’t. It just won’t.

Things have begun to look up. I started going back to practice. I played in two scrimmages and a bout. I have another bout this weekend. When I came back, I couldn’t do much at first but I had to start skating again. I had to. I just had to.

The thought of not returning to derby had crossed my mind. It’s hard not entertain the idea that the injury is a message from the universe. DON’T DO THIS. STOP HURTING YOURSELF. DANGER. TURN BACK NOW. For a few weeks, all I wanted to do was cocoon in my apartment and watch episodes of “30 Rock.” I imagined myself staying more active in derby when I first learned I needed surgery — NSOing and observing practices to keep connected, maintaining a rigorous exercise routine — but you kind of power down all non-essential areas of life when trying to heal.

But it’s also not entirely true that your life contracts when you’re broken. In some ways it expands. Partially through the discovery of the kindness and generosity of friends and loved ones who help feed you, help you run errands, cheer you up and keep your home from falling into disarray. It also expands through the discovery of your own strength. The strength your body has to physically heal and also the strength you muster to muck through the weeds mentally. Because you need to. You just need to.