Warning: Declaration of Struts_Option_Select::customizer_control_options($setting_name, $priority) should be compatible with Struts_Option::customizer_control_options($setting_name, $priority = 1000) in /home/or0slsffb2ao/domains/callthejam.com/html/wp-content/themes/duet/includes/struts/classes/struts/option/select.php on line 0
 Roller derby: A sport of our own | Call the Jam

Roller derby: A sport of our own

When I meet famous people in roller derby, I always try to ask them the same question about our sport: Why did it catch on and become so popular when it did? I’m particularly interested in why so many women took to the fledgling pastime and turned it into a movement, and why it became so meaningful in so many individual lives. I always get interesting answers. One derby coach I asked a couple years ago in the parking lot of a general store in Michigan, where I had traveled to attend her multi-day workshop, responded with a quote from the writer Victor Hugo: “You cannot resist an idea whose time had come.”

I like this grandiloquent way of responding because it hints that the revival of roller derby was somehow inevitable, manifest. Yet it also nearly sidesteps the question by punting it into the realm of the philosophical, the metaphysical even. But I also think it’s a specific and correct way to answer the query. It points us to the next question of: Why was roller derby an idea whose time had come?

I wish I had a cash advance and the time and the training to write a book on that topic because I’d love to spend a lot of hours doing research, thinking and talking about it with other people. But I can make some guesses based on my experience and observations. I think there’s a confluence of sociological-political-historical factors at play, but also a couple of very basic, visceral experiences that suck us in, two of which I’ll take a stab at:

The older you get, the harder it is to make friends. Derby may yet become a sport we see commonly played by schoolchildren, but so far, it’s been most important in the lives of women (and others) in their 20s, 30s, 40s and beyond. Unless you came right out of junior derby, you probably sailed into those post-college doldrums when everyone begins settling into jobs and coupling off and having babies … and suddenly no one wanted to go out for a drink on a Thursday night. Or maybe you hit those milestones but found yourself dismayed that your world had become so much more insular than it used to be.

Derby is one of the only things I can think of besides going to school that so instantly plugs you into a giant network of people. That’s not to say that everyone you meet in derby is someone you want to befriend. You will inevitably find yourself connected on social media to people whose political views you find repugnant. You will struggle over whether to hide or unfriend them. And if (like me!) you’re socially awkward in real life, you will surely still be awkward in derby.

But you will also have tons of things to do and people to do them with. And you will make friends, perhaps some of the best friends of your life. It’s a very real fact that derby gets us through some of the hardest times we encounter — break-ups and divorces, deaths and losses, cross-country relocations and even the injuries caused by the sport itself. 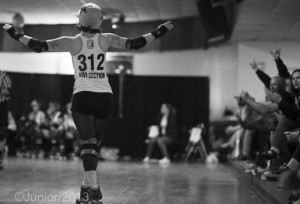 We should all get to feel like a celebrity for a minute. (Photo by Junior)

You also get to be a celebrity. Well, not really a real celebrity by the standards of gossip magazines, though some of us have gotten to play on cable TV, or have been interviewed by local and national media, or have signed autographs and become idols in our sport’s community. At the very least, you mention you play roller derby and it elicits an impressed response, even if people don’t know exactly what it means. Some of us have played in front of thousands on an international stage, but even the thrill of competing in a skating rink for a couple hundred fans cannot be underestimated. Maybe you’ve never had that many eyes on you or that many hands clapping in your ears. Maybe no one ever told you that you are awesome and strong and worthy of attention. That experience is transformative.