Warning: Declaration of Struts_Option_Select::customizer_control_options($setting_name, $priority) should be compatible with Struts_Option::customizer_control_options($setting_name, $priority = 1000) in /nfs/c04/h01/mnt/60107/domains/callthejam.com/html/wp-content/themes/duet/includes/struts/classes/struts/option/select.php on line 42
 Oh, the (strange) places we’ll go! | Call the Jam

Derby takes you strange places. And I don’t just mean a shitty skating rink in a shitty town you’ve never heard of. Or up on stage at a dive bar, singing karaoke in a pair of cow-print chaps. (Though it takes you there, too.) Sometimes it takes you bursting into a room full of newspaper journalists from around the country and entering into a spirited simulacrum of “Queen of the Rink” on carpeting with a skater you just met twenty minutes before.

If my life had taken a slightly different path a few years ago, I would have been on the other side of the encounter I described above, a training session for reporters learning how to shoot video. I would have been earnestly trying to position my iPhone to get some decent footage of two women in full derby regalia, smacking each other around a conference room. I would have probably been wistful about not being the ones on skates, and just overall a little in awe. Three and a half years ago, I left my job as a cops reporter working the night shift covering murders and car wrecks and river drownings to move to my current city and a magazine job with mostly normal hours and generous time off. That choice in part is what allowed me to get involved with derby. 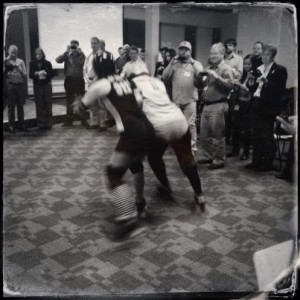 Courtesy of Junior / I WAS the “breaking news.”

Sometimes — most times if I devote concerted thought to the idea — I miss covering breaking news. It took me nearly a year of working for the magazine to recover from my instinct to direct myself toward crime tape and the blaring sirens of emergency vehicles every time I encountered them. Just for funsies, I occasionally nostalgically listen to the police scanner app on my phone. Sometimes I even miss the inverted pyramid, though I’ve gotten to write much more creative, sprawling prose since I left that job.

For the purposes of the training, I WAS the “breaking news.” It was a clever scheme devised by the girl I was blocking and counterblocking, a nine-year derby veteran who also works in the journalism business and is travelling around the country helping reporters learn to make video and introducing them to the thrill of derby. For the few short minutes it lasted, that hitting session with journalists circled round, I was a kind of metaphor for the thing I’d spent so much time and professional focus on in the years before I was a derby girl. Very strange indeed.