Warning: Declaration of Struts_Option_Select::customizer_control_options($setting_name, $priority) should be compatible with Struts_Option::customizer_control_options($setting_name, $priority = 1000) in /nfs/c04/h01/mnt/60107/domains/callthejam.com/html/wp-content/themes/duet/includes/struts/classes/struts/option/select.php on line 42
 Finding friendship on the flat track | Call the Jam

Finding friendship on the flat track

I didn’t join derby to make friends, but somewhere along the way it happened. Many people seem to walk onto a league and find an insta-social network. They shack up with a derby wife, go for beers after practice, rest assured in the knowledge that any life crisis will be attended by a legion of new league friends. It took me awhile to find my niche.

Over my life I’ve accrued quite a few friends at my various jobs and schools and other activities, but I don’t make friends easily. I don’t open myself up quickly and I’ve long had a healthy dose of social anxiety, though I learned to mask it decently in adulthood, and in the past year or so let go of an impressive lot of it. I credit derby in part with giving me the confidence to do that. But it was not always so easy.

Flash back to an ice skating lesson during my childhood in which I attempted to join a conversation with some fellow skaters in a group practice. “It’s really cold in here,” one told the other. “I know! I’m freezing!” the other said to the one. “I’m really cold, too,” I offered by way of joining their chat. Even at that age – literally, I must have been about five years old – I caught the look that one shot the other, the signal that made it clear I wasn’t welcome in their most banal of conversations. My earliest memory of social isolation, of outsider-y-ness, crystallized in a frigid ice rink.

Washing up on the shores of derby are those who’ve probably suffered alienation at one time or another, who’ve had one or many of these experiences. And there’s a myth about derby that it’s a home for everyone, that everyone is welcome and accepted and embraced for who they are. How much we sometimes idealize it must be a testament to how much we love it. How much we want those things to be true. I think that bit of lore can make it hard for some girls who join derby and don’t feel they immediately fit in, even in the midst of a friendly league culture, which I’m proud to say mine has. About a year ago, I remember reading an essay written by a derby girl that detailed her disillusionment with the social scene, how she’d been disappointed by girls on her league who’d once been her BFFs, and was taking a step back from it to avoid the drama she’d been shocked to discover off the track. I liked the self-reflective tone of the piece, but found her surprise surprising. She had believed in derbytopia. It was always clear to me that derby is a human enterprise with many unique strengths, but also the flaws that you find anywhere. Some people come to derby hungry to fit in and don’t find their niche, for a various reasons. Some people come to derby without many expectations and find a more comfortable a place than they’ve ever found for themselves anywhere. Most of us find ourselves somewhere in between.

At our end-of-season party a few weeks ago — my third with my league — I found that a lot had changed over the previous year for me.  It was a world of difference from the party two years before, where I was nervous I wouldn’t know anyone well enough to sit with them, and even from the prior year. This time I knew a lot more people. A lot more people knew me. Part of this was having served out my second year on the league’s Board and just making a better effort to get out of my headspace and try to know my leaguemates a little more this past year. The party felt like more of a celebration than a social gauntlet. I felt more comfortable, less anxious. To be honest, I didn’t feel anxious at all. 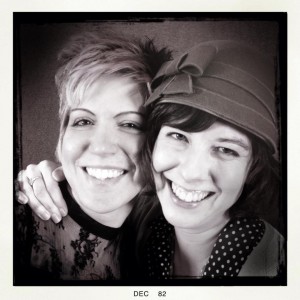 Courtesy of Junior / Here is a dear friend I made in derby (Roll’r Damage on the left, me on the right).