Warning: Declaration of Struts_Option_Select::customizer_control_options($setting_name, $priority) should be compatible with Struts_Option::customizer_control_options($setting_name, $priority = 1000) in /nfs/c04/h01/mnt/60107/domains/callthejam.com/html/wp-content/themes/duet/includes/struts/classes/struts/option/select.php on line 42
 When you meet a true jammer-killer, don’t back down | Call the Jam

When you meet a true jammer-killer, don’t back down 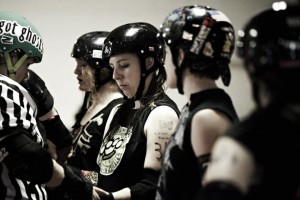 I had a bad first jam. It was only a scrimmage, but the participants hailed from a mix of nearby leagues and I knew none of them well. We had come together on a holiday weekend to glean some knowledge from a coach who had traveled halfway across the country to lead a two-and-a-half hour workshop, with the scrimmage as a kind of dessert to follow the main course. My team captain was a star jammer from a top team in the region. I was especially keen not to fail. But you know how sometimes you get into a pack and realize you weren’t quite prepared for what it was going to be like? You expected rough waters, but it turns out to be rough waters + sharks?

My opponents in that first jam included the coach who led the workshop, which focused mainly on blocking techniques. There was a reason she was invited halfway across the country to lead a workshop focused on blocking techniques. I felt this keenly as she whaled on me during my initial pass, executing a booty block that seemed to rearrange my internal organs. Joining her campaign was a notably gnarly blocker from the host team, who we narrowly beat this season. (I mean “gnarly” in the most complimentary way here — it was a tough jam.)

I didn’t get lead. The opposing jammer scored points. I returned to my bench sweaty, winded and full of doubt. When our team met before the scrimmage, I had quietly offered to wear the star panty, alongside the exceptionally talented celebrity jammer and two others from the host league. All three grabbed lead in our first spin through the rotation while I got manhandled before finally breaking through. My opposing jammer made one, maybe two, scoring passes. When the four whistles heralded the end of that first jam, I immediately considered offering to drop off the rotation. Maybe I wasn’t cut out for this. Maybe I would embarrass myself. Maybe I would embarrass my league.

I forced myself to remember this was a learning opportunity. Had I ever had the chance to be hit so hard and so expertly? No, I had not. Had I ever been in a rotation with a jammer who played at Nationals? No, I had not. Was I going to miss an opportunity, this unique chance to get my ass handed to me, to get beaten up by a blocker who operates in a higher stratosphere of jammer-killing than one I had yet encountered? No, I was not. 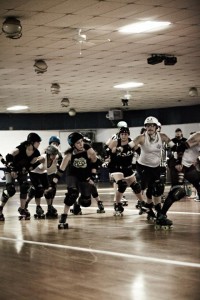 Photo courtesy of JKorn Photographics / Avoiding the jammer-killer (in glasses).

So I bit my tongue. I gulped some water and mentally reached for my Zen place. I told the negative voices to shut the fuck up for a minute. I got my ass back out to the jammer line. And the rest of the scrimmage went decently well for me. I got lead, even a couple times past the jammer-killing coach before hitting turn one. I scored points. I knocked an opposing jammer down when she got out of the pack. I got to work with and compete against some superlatively nice girls who play hard and strive to improve. I had repeated chances to get my shit seriously knocked around. I survived. I enjoyed it. I learned from it. And, it barely matters, but my team won the scrimmage.

Afterwards, I thanked the coach for her amazing workshop. I had learned so much. I had sweated so hard. I felt so energized. She said that she had been by amused the look on my face at the jammer line. That she could see how much I love derby. For a second I wondered if that was the kind of thing you say just be nice, when you can’t think of anything else to say. Then I told the negative voices to shut the fuck up for a minute. Because it is true. I do love derby. They were hard jams. But I was looking forward to them.

During the coach’s brief concluding remarks to the 40 or so skaters who completed the workshop, she advised us to go home and think about a few great things we’d accomplished on the track that day. She recommended we register our mistakes but not brood on them. We get beat up enough just being women, she said, don’t add to it by beating yourself up. It’s a message a lot of derby girls need to hear, myself included. I’ll remember the times I fought past that coach in the pack. I’ll remember experiencing a few “a-ha” moments while backwards blocking. I’ll remember maintaining some strong walls against offensive attacks. I’ll remember not getting so torn up about my first jam that I couldn’t get over it.