Warning: Declaration of Struts_Option_Select::customizer_control_options($setting_name, $priority) should be compatible with Struts_Option::customizer_control_options($setting_name, $priority = 1000) in /nfs/c04/h01/mnt/60107/domains/callthejam.com/html/wp-content/themes/duet/includes/struts/classes/struts/option/select.php on line 42
 On first bouts and becoming something sort of like an athlete…? | Call the Jam

On first bouts and becoming something sort of like an athlete…?

Some girls on my league have their first bout tonight and I’m going to miss it. I’m in Chicago to celebrate my aunt’s 65th birthday. You know, achieving that derby-life balance thing. Sort of. I already requested text updates from friends who are attending.

I got to thinking about my first bout this week. I had to be cajoled into participating — it was a fresh meat showcase in a rust belt city about four hours away, which was probably a blessing because no one I know needed to see it. To put it very mildly, I did not know what the fuck I was doing. I had joined league about five months earlier and things were not clicking. The rules, the strategy, everything was still shrouded in this swirling cloud of mystery. But the girls I started with had already made rosters and I felt I needed to start playing the thing I was practicing for. In the locker room in the downtown convention center in the rust belt city, I begged our coach for some last minute “tips.” What I was actually asking from him was to explain to me how to play roller derby. I’m not exaggerating here. I didn’t get it. I’m a fairly smart person, but I had never played a team sport in my life besides in PE class, which I think contributed to my exceptionally steep learning curve.

Two more things stick out in my mind from the bout. One: I was terrified of the crowd, of being looked at by the crowd, of being distracted by the crowd, of even being in the same room as the crowd. Two: I feared I would get called out on a major penalty during the jam and not hear the ref. My first fear was quickly alleviated at the first whistle, after which time I did not hear/notice the crowd at all. My second fear was realized and one jam ended with an exasperated ref screaming at me to skate my ass to the box. But I survived. As did some photographic evidence of the event. Just look at the poor little lamb on the far right here. That’s me. 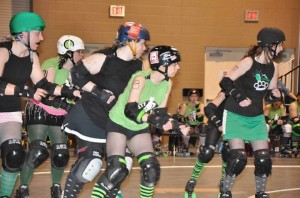 Sorry, I have no idea who took this photo or how I have it.

Two things come to mind when looking at this shot. One: Although I don’t look I could stop a jammer with a weapon, I am at least looking behind me. Two: What sad little chicken legs I have! Of the many things derby gifted me over the past two and half years, it is a much more impressive set of thighs and ass that I can put on people. (And, if you haven’t read this exceptional tribute to the Almighty Booty on ESPN, do so post-haste!) Let’s compare and contrast with a shot from my last bout.

It startles me to discover that somewhere along the way I became something sort of resembling an athlete. It’s not a word or a concept I ever expected to apply to myself. I used to smoke. I used to hate sports. I used to give up on anything I wasn’t immediately good at or didn’t understand. But somehow poor, timid, little chicken leg girl survived, stuck with it and, most amazingly, became something else. It’s so rad that derby gives us this opportunity if we choose to take it.