Warning: Declaration of Struts_Option_Select::customizer_control_options($setting_name, $priority) should be compatible with Struts_Option::customizer_control_options($setting_name, $priority = 1000) in /nfs/c04/h01/mnt/60107/domains/callthejam.com/html/wp-content/themes/duet/includes/struts/classes/struts/option/select.php on line 42
 A letter to my teammates | Call the Jam

A letter to my teammates

Dear teammates, especially those on the roster for June 16, 2012,

I am writing this letter because I have a confession to make. It pains me to admit this, but I think I did not believe in you. When I say “you,” I include myself. Maybe it would be more accurate to say that I did not believe in us. We faced a really hard team last Saturday. It was a team that beat us two times before — the first year badly, the second year soundly. I’ll never forget playing them in their city two hours south last summer in a crowded, seedy, humid roller rink. The opposing blockers pummeled our jammers as theirs handily lapped our defense. I vividly recall getting knocked down in turn three and, with a kind of cinematic flourish, the sounds of the crowd fading to the background save for a single voice, laughing at me as I picked myself up from the wooden floor. I’ve been scoffed at, condescended to and made fun of … but that was the one time in my life that I recall someone jeering at me.

There, I said it. I did not think we would win. Even when we were winning, I did not think we would win. The halftime score was 59-58 in favor of our team. The mood was confident and positive as we planned our strategy for the second half. Lead changes and tie scores abounded, and at one point we saw a differential of 89-111 in favor of our opponents. But that was about the most ground we lost. Still, I could not picture us winning. Maybe it’s my historical pessimism, a personality flaw I’ve been wrangling with. A tendency to expect the worst to ward off disappointment. Perhaps it’s a much newer commitment to being more in the moment, to not trying to influence the future with my brain, to letting go of that impossible task. Still, I felt like I should have known. I fear that I failed to believe in you, in myself, in our team.

It was the second time this season that the game came down to the final jam. 122-122. The crowd rose to its feet. Our bench rose to its feet. Unlike the nail-biter two weeks before, our jammer broke through the pack. I held my breath for a second. The ref whistled, pointed. Lead jammer! We had it. I began jumping up and down, yelling my head off. Our blockers battered the opposing jammer at the back of the pack. Our jammer lapped the pack once. The period clock ran down. She came around again. She called it.

With much love and humility, 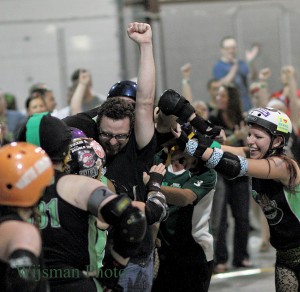