Warning: Declaration of Struts_Option_Select::customizer_control_options($setting_name, $priority) should be compatible with Struts_Option::customizer_control_options($setting_name, $priority = 1000) in /nfs/c04/h07/mnt/60107/domains/callthejam.com/html/wp-content/themes/duet/includes/struts/classes/struts/option/select.php on line 42
 Post-Season Thoughts About the Big Show | Call the Jam

Post-Season Thoughts About the Big Show

After eight years, I finally made it to the Big Show. It wasn’t the Big Big Show because my team didn’t qualify for Division 1 this year. But, still. It was a WFTDA tournament with some teams and players I had been watching for years, along with relative newcomers — including, thrillingly, a bevy of international teams — I had never seen play.

It was an especially exciting year at a tournament that tends toward the fiercely competitive. So many upsets and close matches occurred. I don’t think anyone expected my team to do as well as we did, but (spoiler alert!) we broke a bunch of brackets and went home with medals.

I had gone to D1 playoffs in Vancouver the year before as part of my league’s charter with the knowledge I wouldn’t play, so even seeing my name as an alt on one of those rosters gave me a little frisson. D2 in Pittsburgh was the first tournament experience in which I had a reasonable chance to roster, and I did. This is a cool thing for someone who has been Twittering along with the WFTDA.tv streams for years (shoutout to my #derbytwitter peeps).

So what else can I say about playing in the Big Show? It was like regular derby but with a little more thrill and polish — and more people watching. My friend took a picture of me set up with my pack for a jam start on WFTDA.tv, which was surreal. I’ve played this sport for so long that I don’t really get scared anymore. Not jamming also helps the nerves! The games didn’t feel a lot different than any other games. The officiating and announcing are certainly top notch. Shit starts and ends on time for the most part. The host league did a great job.

Overall, there was a really friendly, collegial vibe at D2 #wftdaplayoffs. Great hosts, great teams. A+, would do again. Cc @SteelCityDerby

When I started derby, I didn’t have high aspirations. I wanted to do something physical and fun, and meet people in a new city. For real: I didn’t really even picture the part when I was actually playing, so it was a (scary) surprise to see my name on a roster for the first time. I didn’t expect to ever be any good. I didn’t expect to one day transfer to a WFTDA tournament-qualifying league. Even when I did that, it was still a long road to qualify for a roster at the Big Show. It has been eight years since I started learning how to play roller derby, almost to the day. It has been three years since I joined my current league. I am, some might say, a slow achiever.

Tournaments have always been my favorite of all things derby. I love the physical and mental challenge of playing multiple games in a short period of time. In my experience, teams never get closer than they do during tournaments or other multi-bout events. It’s a great time to test your mettle, explore the different tools in your kit, make adjustments to contend with vastly different opponents and learn more about your teammates. It’s a lot of team-building in a short period of time.  The best and worst can come out in people. It’s usually the best.

I got to play in four games, and I’m sure I did some good things and some bad. I kept my penalties low. Importantly, I had fun, even during a really tough game against the team that went on to win the whole deal. The surprise came when I didn’t get rostered for the final game for the third place medal, a rematch with a fun, scrappy international team we had played earlier in the tournament. It was a shock, as you can imagine, to be told via Messenger: Thanks for your service, we don’t need you anymore.

It was like being asked to suddenly leave a party where you were having a good time, and then watching the festivities continue through the picture window from the dark lawn outside. Anyone who knows me personally will understand the deeper nuances of the party analogy. I’m not a person who often has a good time at parties.

I’m not here to object to decisions that were made, but present my feelings so that you might be able to imagine and relate and perhaps feel less alone with your pain in the world. And maybe I will too.

The final game was thrilling to watch. My team did an incredible job and I was proud. 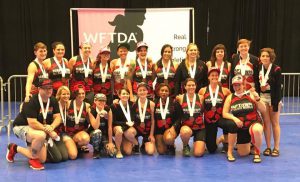 After posing for the official picture in front of the WFTDA banner, I put my medal in my purse. I’m not the kind of person who would really walk around wearing a medal, anyway — I mean no disrespect of course to people who want to show their pride that way. But I also didn’t feel that I totally earned it. I felt deeply ambivalent. My ambivalence continues today. I don’t know what to say when someone asks about my experience at playoffs. It’s not dissimilar to other milestones for me — getting into a great college and earning a degree, getting a full scholarship to a great graduate program and earning another degree, living and working abroad, seeing my bylines in print and online, moving on my own to a new city. Maybe it’s imposter syndrome, maybe it’s the effects of depression and anxiety. These experiences that seem like they should be joyful are shot through with strands of pain and a little happiness, like threads of light filtering to the murky bottom of a lake.

So this post is not only for the slow achievers, but to those for whom the magic of derby isn’t total. For those who have ever felt like maybe there was something wrong with them because derby didn’t transform their entire lives for the better like the last five minutes of a reality show.

Still, it was cool to finally get to the Big Show. Do it if you can. But if you can’t, that’s okay, there are so many other great things to experience in derby and life.

Sometimes trophies and awards and medals are complicated. Sometimes derby feels like a bad relationship — it hurts you and you keep going back. You hope the balance will tip toward the good in the end. I think it will.

I bought new skates near the end of the season. I’m taking opportunities here and there during the off-season to break them in, this last pair of skates I will probably have for roller derby. It’s been a long run. I’m getting older. I have my own business now. I think about centering my universe around something other than this sport. I want to write a book. I want to volunteer more of my time. I want to keep traveling. I want to know myself better. These are long-game pursuits, just like roller derby. But even after eight years, I’m not quite ready to close this chapter. Skating still gives me that little spark sometimes, so I will keep going for now, keep grabbing for the threads of light. One practice, one bout, one season at a time.