Warning: Declaration of Struts_Option_Select::customizer_control_options($setting_name, $priority) should be compatible with Struts_Option::customizer_control_options($setting_name, $priority = 1000) in /nfs/c04/h01/mnt/60107/domains/callthejam.com/html/wp-content/themes/duet/includes/struts/classes/struts/option/select.php on line 42
 I took a break from derby and the world didn’t end | Call the Jam

When I was a young punk kid spending my weekends at grungy basement shows, there was a local band that played a song with a lyric that said: “There’s a great big world beyond the scene.” The words resonated and stuck with me over the years — although the concept later seemed obvious, I periodically needed reminding. At the time, I needed to expand my focus outside the literal scene they were talking about, but the idea also applied to other scenes in which I became entrenched in subsequent years. Activism, journalism, roller derby.

After a season that for whatever reason ground me down both mentally and physically, I needed some time to make derby a lesser priority. That’s not to say I completely marginalized it. I went to practice with the men’s league, I kept up with posts on our league’s Facebook page, I helped plan for our fall recruitment workshop, I watched a ton of playoffs. 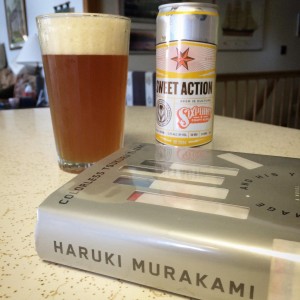 I drank beer and read books on my break.

But my gear mostly stayed in the corner of my place. I rode my bike a lot. I read books. I went on vacation and climbed some mountains. I drank beer. I did some freelance writing. I slept in and went to the coffee shop on Sundays. I saw live music. I looked at art. I stayed late at work. I did a few things on a whim instead of scheduling out every last minute. Mostly, I just enjoyed not having to structure my week and plans around big intransigent blocks of time called “PRACTICE.”

Never before this year in my derby career did I want to take time off. For over four years I felt this way. Our league would go on a two-week hiatus around the holidays and I’d be itching to get back on skates. Others would complain about never getting a break, but not me. I had nothing in life that really prevented me from throwing myself into it whole heart and soul all the time and that’s what I did. Before, I would feel anxious if I missed any practice I usually went to — I felt anxiety over giving up that time I could have been getting better. This year I finally got it, though, what the others talked about. I felt the need to diversify my free time, to rest from the relentless focus on one thing.

I hadn’t planned on taking two months off. Our league scheduled about a month after our final bout — a common practice in the derbyverse — and it occurred to me about halfway through it that I didn’t need to go back right away. And if there was any time in the year to take off, guilt-free, this was it. Very few amateur athletes train year-round for a single sport. We get obsessed in derby; we’re junkies, die-hards.

But I decided to give myself the gift of some time. I granted myself permission to take a break and I did it. The only event looming on the horizon was an annual Halloween costume bout for fun. Perhaps I could hedge against future burnout by giving myself some breathing room now.

I also hiked up some mountains. It was fun.

I look forward to getting back on skates this week. Maybe some skills will have integrated. Maybe I’ll have a fresh perspective and approach. Maybe I’ll feel a little more wholly myself. I’ll have to work hard to get my endurance back and settle into the training mindset. It’s going to hurt more than usual for awhile. I will surely miss all the free time to do as I please. But I’m glad to know the world doesn’t end when you take a break.