Warning: Declaration of Struts_Option_Select::customizer_control_options($setting_name, $priority) should be compatible with Struts_Option::customizer_control_options($setting_name, $priority = 1000) in /nfs/c04/h01/mnt/60107/domains/callthejam.com/html/wp-content/themes/duet/includes/struts/classes/struts/option/select.php on line 42
 Roller derby did not save my soul | Call the Jam

Roller derby did not save my soul

I thought it did. For a minute. Actually, it was much longer than a minute. A couple of years, really. A good stretch of time, and it didn’t start the minute I strapped on a pair of skates. Unlike many of my peers, I came around to derby slowly and didn’t experience some kind of immediate, amazing life transformation like others seemed to. But, over time, roller derby did have a huge positive impact, which I’ve taken pains to document here.

But it did not fix everything.

These past few months I’ve needed all the advice I’ve published on Call the Jam — go to practice, get out of your derby rut, let go and have fun, stop criticizing yourself and on and on. I hit a wall with derby early in the season.

I had bouts where I didn’t even feel like I was there, like I was outside my body watching this mediocre, uninspired skater get beat up without really trying to fight back. I phoned in more practices than I can count in the previous four years total.

I consider the low point a recent practice when I just felt shitty, mentally and physically. I was exhausted and hurting. I turned to a teammate and began to try to explain. And somewhere a sentence or two in, it occurred to me: “She doesn’t want to hear it.” I didn’t even want to hear it really. I looked around the warehouse at all the people skating around and thought: “No one cares.” I mean, on some level they care, don’t get me wrong. But my lame attempts at generalized communication of this vague, nearly inarticulable state of ennui, melancholy, whatever it is, they don’t really care. My mind looped out to the city outside, this adopted home of mine for the past five years, and I thought: “No one cares.” It looped further and further and the same thought kept echoing back.

Perhaps it sounds melodramatic, but I felt more alone than I had in a long, lonely stretch of time. I wanted to take off my gear and walk out. Get in my car. Drive to the ocean. I wanted to be somewhere I could feel small in a good way instead of the ugly, scabby, petty, rotten way I was feeling it. Had been feeling it for months.

But I kept skating.

Sometimes you skate and you don’t know why anymore. The meaning of it all floats just outside your grasp. You feel it in the atmosphere, somewhere above the warehouse where you skate, outside the door of the bout venue in some shitty Midwestern town. You try to remember who you were before this whole derby thing began. You were a person who liked books. And politics. And records. And thrift store shopping. And playing Scrabble at bars. And going to punk shows. That girl is still in there, and she’s made room for the derby girl, the aspiring jock who likes to do boot camp and run up stairs in her free time. It feels crowded in there sometimes, confusing. 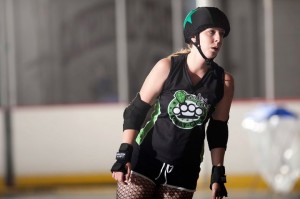 Sometimes this shit is not easy. (Photo by Junior)

I haven’t written here much all season because I don’t know how to write about this. The practice, the games, the experiences don’t feel like metaphors for something else all of sudden. They feel like markers in the passage of time. Rituals with meanings you have temporarily forgotten.

Every time I write something down and share it here, it’s like I’m ripping open a piece of myself and shining a light in there. It’s a difficult thing to do when you’re exhausted. Honestly, it’s a difficult thing to do on a good day. Each time I’ve started something with the intention of posting it here in the past few months, it looked trite and trivial on the page. I don’t want to waste your time with that.

Hopefully I’ve managed to say something here. It’s maybe not the inspiring, pithy Buzzfeed-type list you can share with all your derby friends and they’ll say: “This is just what I needed today!” But hopefully there are some honest emotions that someone can relate to. For me, I hope it helps me to get back in my writing and derby groove.

Skate on, my friends, let us all skate on.