Warning: Declaration of Struts_Option_Select::customizer_control_options($setting_name, $priority) should be compatible with Struts_Option::customizer_control_options($setting_name, $priority = 1000) in /nfs/c04/h01/mnt/60107/domains/callthejam.com/html/wp-content/themes/duet/includes/struts/classes/struts/option/select.php on line 42
 Attitude, unity and taking a victory lap when you lose | Call the Jam

Attitude, unity and taking a victory lap when you lose

What an outpouring of kindness and love I received after my last post! That was unexpected. I admit I cried a few times while writing it, but I felt almost immediately better having set those words down and sent them off into the world. It was cathartic, I think, just to express what had been percolating under the surface for months.

Not to say that everything is now fixed. That would be naïve. But I did manage to go into our last competition with the attitude that I was going to have fun no matter what happened.

At the end of the last team practice on Thursday before our bout, we sat around in a sweaty circle and told everyone a word representing what we were going to bring as an individual to our game, and a word to inspire the team. I knew “attitude” was the word I needed to say for myself, it was the thing I most needed to bring to the venue on bout day. Anything else would have been irrelevant. I promised I would come in a good mood and be ready to have fun, which is when I play my best. The word I said for my team was “unity.” 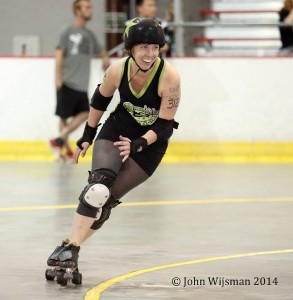 I said I would bring a good attitude and I did. (Photo by John Wijsman)

After I rolled out of bed groggy-eyed on the morning of our bout, I sat down at my laptop and started banging out my previous post. I needed to get it out there. I wiped tears from my face and kept writing. It was painful to remember and recount all the shitty feelings I’d been struggling with. But I did feel a little better.

To be honest, I had had a terrible attitude about our upcoming bout. We’d had a last-minute cancellation for our opponent and our interleague coordinator busted her butt for weeks, trying to find a replacement. We ended up asking the B team of a league that’s ranked much higher than ours, and they’d graciously accepted despite having limited skater availability and their own workshop to run earlier in the day. Huzzah!

When the rosters came through, though, I recognized some of the names on it, which made me nervous. As bout day approached, another change was made to our opponent’s lineup and it suddenly included a name I recognized quite well. Honestly, I kind of crapped in my athletic shorts — this skater is really fucking good, someone I’d noticed and cheered on WFTDA.tv at divisionals and championships and who I’d put in the little pantheon of derby people whose fortunes I love to follow.

Remember that post I wrote about roller derby heroes? Yeah, well, sometimes in the derby world, your heroes actually come to your own home bout venue to kick your ass. I had a really shitty attitude about it. I know, I know, I should have been excited to play world-class players I’d admired from afar. But the whole thing made me feel sad and exhausted, and embarrassed for my own situation vis a vis derby. (See my prior post.)

I complained a lot in the week leading up to our last practice. I discouraged people I knew who expressed interest in attending our bout from coming. I couldn’t wait for the whole thing to be over. I pictured the whiskey and soda I would order at the afterparty and focused on that moment like it was a tiny boozy lighthouse in a shitstorm. My visualization for the upcoming bout was a fucking cocktail.

But then at that last practice, I decided I needed to make a change. I only had two bouts left to go before the conclusion of our season, and I couldn’t handle the heartbreak of going through a whole derby year feeling like absolute garbage, not wringing a moment or two of pleasure from the opportunities that the sport was providing me if I chose to take them.

I promised my team I’d bring a good attitude. That was all I was in control of — not the opposing team, not even my teammates. Just me and what I brought the bench. Sometimes, if you struggle with real mental health or other issues, it’s not as easy as making a decision. But this time it worked for me.

Maybe it was writing some of it out, maybe it was making a verbal promise to my teammates, maybe a tide of change was rolling in on its own. My team didn’t win, but we had an excellent game and the attitude on the bench was positive. Everyone on my team looked like a real badass out there to me. They were demonstrating that unity for which I’d expressed a wish during our sweaty congress a few nights before. I felt excited each time I went out to jam. I felt capable. I felt “on.” I had some real personal victories, and I felt joy in getting to play with high-level skaters I really admire. Honestly, it was the highlight of my season.

I actually felt so relieved to have had a good experience that I burst into tears in the ref lane after the bout, which I know confused some of the folks who came to congratulate me. “Good tears,” I said, “these are good tears!”

“Sometimes in the derby world, your heroes actually come to your own home bout venue to kick your ass.” (Photo by John Wijsman)

The cherry on top of all that was the unexpected outpouring of support I received in the wake of the bout and blog post — from my teammate who tried to give me her MVP award to a friend who posted kind words on my Facebook wall and everyone who liked that post to the folks from around the derbyverse who read and commented on my blog to those who messaged me directly to the likes I got when I posted the picture of me grinning like a maniac to the coach who told me he thought my contributions in one of our jams helped boost our whole team’s level of play in the second half. You folks are just so fucking great, you don’t even know.

After the bout, I felt so elated that I actually tried to take the victory lap before our opponents once the final whistle blew. What a dickish gaffe that was! But it shows, I think, that sometimes a win doesn’t show on the scoreboard. The tears on your cheeks might be the better indicator.