Warning: Declaration of Struts_Option_Select::customizer_control_options($setting_name, $priority) should be compatible with Struts_Option::customizer_control_options($setting_name, $priority = 1000) in /nfs/c04/h01/mnt/60107/domains/callthejam.com/html/wp-content/themes/duet/includes/struts/classes/struts/option/select.php on line 42
 For the joy of derby | Call the Jam

For the joy of derby 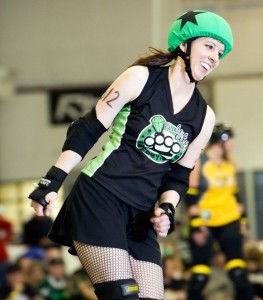 Courtesy of Junior / I was just starting to learn how to get happy here.

We all have our reasons we joined roller derby, but is there any one among us who didn’t strap on skates at the very beginning because they thought it would be fun? Whether you wanted to get in shape, toughen up your image, make new friends, spend some time on roller skates, you thought at least some of it would be fun. Even if you were scared shitless, you knew on some level it would be a blast.

Isn’t it ironic then how often so many of us forget how to have fun in derby? We get caught up in criticizing ourselves for our own inadequacies. We think about how we sucked at practice, we missed the jammer, we got stuck in the pack, we went to the box, we didn’t even make the roster. We get frustrated at the other team. The refs are against us. Our teammates didn’t do what we wanted them to do. Our coach said the wrong thing. A loss is bumming us out.

This is not to say that we shouldn’t take it seriously. Training and advancement requires a special seriousness and focus. There’s no reason to get complacent or 100% satisfied. But what is the point of not having fun? You can still take it seriously and have a fuckton of fun.

Here’s a thing I discovered this year. There are a lot of pictures out there of me smiling while playing roller derby. Our league photographer remarked early this season that I was good for about one shot per bout with a huge grin on my face. Winning bouts, losing bouts, it doesn’t matter. Doing something awesome, doing something awkward, having a laugh with my team on the bench, getting all giddy over a victory. I guess it’s kind of a thing. Maybe this would be less weird if I were a historically happy-go-lucky person who had always been quick to smile in other areas of my life. But unbridled joy is something that hasn’t ever come naturally to me. I’ve struggled with depression and a pretty negative outlook for most of my life. My boss at a job I had during my mid-twenties called me “Eeyore.” It was a great job in which I learned a lot, met loads of interesting people and made friends I still have to this day. I should have been smiling a lot. But I wasn’t.

I can’t say if derby is the chicken or the egg. Did it come into my life at the right time, when I started to take more control of the experience I was having in life and letting go of the self-criticism, the negativity? Or did derby teach me how to do that? In any case, I feel sort of evangelical about reminding other people to have fun at derby now. Remember why you got involved, let it happen. I’m pretty sure it also makes you better at what you do if you’re having a good time. I have a tough bout tonight. I have a lot of goals for the game, and one of them to have fun. I hope that everyone who is playing today can have that experience, no matter what the scoreboard says. 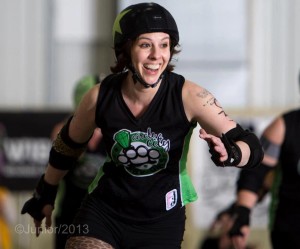 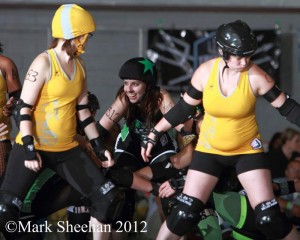 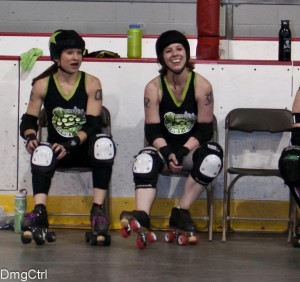 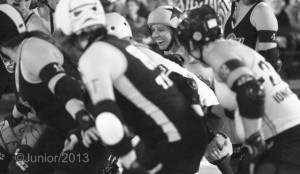 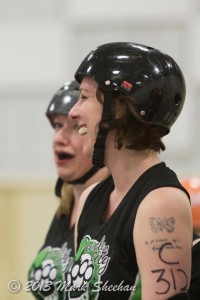 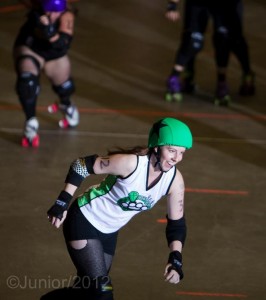 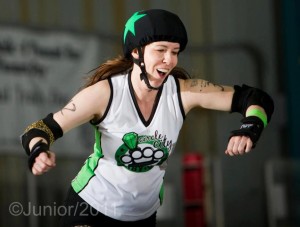 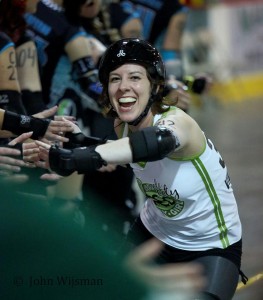 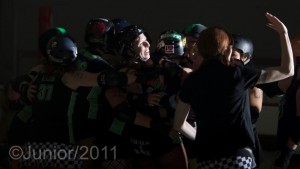 Photos courtesy of Junior, Damage Control, Marc Lebryk and Mark Sheehan / The evidence is in: derby is fun.