Warning: Declaration of Struts_Option_Select::customizer_control_options($setting_name, $priority) should be compatible with Struts_Option::customizer_control_options($setting_name, $priority = 1000) in /nfs/c04/h01/mnt/60107/domains/callthejam.com/html/wp-content/themes/duet/includes/struts/classes/struts/option/select.php on line 42
 Sometimes derby hurts | Call the Jam 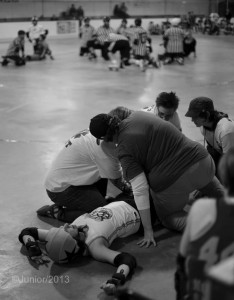 I fell. I couldn’t get up. I hadn’t planned to write this post about injury, but then I got hurt. It was like jumping off a merry-go-round, like turning the sound off during the most dramatic part of a movie, like plunging to the bottom of a public pool on a busy summer day. The sights and sounds of the world collapsed around that single point of pain. The pain became a black hole, sucking everything else in.

The jam was called. I was sprawled in the ref lane, unable to move. Per derby custom, skaters and refs took a knee. The medics converged on me. They started removing my skates and asking me questions, which I did not want to answer because I just felt like lying there for a bit, letting the pain wash over. Answering questions required too much thinking. But I was lying in the ref lane. And the game had to go on.

Was it my ankle or my knee? Knee. Was it twisted? No. Did it hit the ground? Yes. Could I move my toes? Yes. Could I bend me knee? Yes. But ouch. As my brain started to form some coherent thoughts, I recognized that my knee pad had slid down when I hit the ground, causing the top of my knee to kiss the pavement directly, violently. As a jammer, I’m usually pretty aware when I’m about to get laid out, but the hit that took me out had blindsided me. I think I thought I was out of the pack, home free. Until I was lying in the ref lane on a rack of pain.

The past three and a half years that I’ve been playing derby, I’ve been lucky to remain relatively injury-free, knock on wood. I got one bad concussion during a game of queen of the rink that left me feeling unlike myself for a week, that left me feeling like I’d had two glasses of wine all the time, that made me spacey and caused me to weep at the drop of a hat. Otherwise, I’ve had my share of bumps and bruises and rink rash. But this was my first game-stopper.

I have witnessed at least four skaters break their ankles, along with other assorted injuries. It’s given me cause to consider the practical implications that a serious injury would have on my life: I have a high deductible insurance policy. I live alone in a second-floor walkup in a city where none of my family resides. I drive a stick shift car, which I use to get to work when I’m not riding my bike. I’m a pretty independent person who hesitates to ask for help.

The worst thing about my injury was that it was a rare occasion when members of my family were able to attend my bout, in which I was playing on a co-ed team for funsies, to help another league test a new bouting venue. My uncle, aunt and a couple of family friends came to see me play, and my fifth jam in, I got wiped out. I know I really scared the crap out of them. That pained me a lot, almost as much as my knee did. The second worst thing is that it was the weekend before the home opener for my league. I spent the next week swallowing ibuprofen and filling up bag after bag of ice, waffling between tearful despair and cautious hope that I might be able to play.

What a drama! I’d been focusing so much mental and emotional energy around that bout that the idea of possibly not playing left me bereft. I had to ask myself some hard questions during the week that I’m still trying to answer about why my life looks so empty without derby in it. Even just sitting out of a game for a single weekend was painful to contemplate, though the week’s news made it somewhat easier to keep it in perspective — after all, I hadn’t had my limbs blown off or my home leveled or worse. But still, it was a personal conflict. I wrote this tearful message to my teammates on Friday:

I’m sorry I have not been communicative about my injury this week. I’ve just been wrestling with it, not sure how things will come out, which has been a mighty mental and emotional struggle for me, because all I want to do is play. I am going to participate in warm-ups tomorrow and if I am not feeling like I can play with my best effort, I will take myself out. I don’t want to injure myself for the season, let my team down or even just have the experience of playing a game that is compromised for me. I know that it’s okay not to play. I know you all will do fine without me. I know missing the game is not going to be the end of the world for me personally. It’s just a hard thing nonetheless. It was a fear of mine to get injured during the [last] bout and be sidelined for our home opener. But, again, I know it will not be the end of the world if it turns out that way. I promise that tomorrow I will make the right decision for myself and my team.

I woke up on bout day and carried on as if I would play. I ate a big breakfast, I listened to loud music on the record player, I changed my wheels, I put my new jersey and track jacket on, I packed up my gear bag. I iced my knee. I was hopeful.

I participated in warm-ups with both my league’s teams. My knee felt pretty good — oddly, it felt better while I was skating. I knew my injury wasn’t my PCL or ACL or any of those dreaded acronyms, but I also knew it wasn’t quite healed. I asked my team if it was okay if I played, even though I knew my knee wasn’t 100%. I wanted to make sure I wasn’t making the selfish decision. They said yes. I skated. We won the bout.

Today my knee is still a bit jacked up. It’s several different colors and swollen and I still get the feeling like the skin is ripping open when I bend it a certain way. But fortunately it’s not any worse than it was before the bout. What is better, though, is my understanding of how awful it is to get sidelined by an injury. In fact, a teammate of mine hurt her knee during warm ups and didn’t skate in the home opener. I felt heartbroken for her. We take the risk of injury that goes along with derby because we love it so much. But that doesn’t mean it doesn’t suck when it happens.

Categories: bouts, injuries
No comments yet…