Warning: Declaration of Struts_Option_Select::customizer_control_options($setting_name, $priority) should be compatible with Struts_Option::customizer_control_options($setting_name, $priority = 1000) in /nfs/c04/h01/mnt/60107/domains/callthejam.com/html/wp-content/themes/duet/includes/struts/classes/struts/option/select.php on line 42
 Derby resolutions | Call the Jam

I’ll be honest when I say I was not unhappy to see 2012 kiss off. (Cue that Violent Femmes song.) After getting dropped off to my apartment some time after 1 a.m. on New Year’s Day, I was pretty sober and not quite ready for bed. In the quiet snowy darkness of the early morning, I felt I was still in a sort of liminal stage between 2012 and 2013 so I decided to take a few minutes to write and reflect before bed. 2012: The Year of Sadness. That emotion seemed to be the general vibe, the overarching theme, the fog that blanketed everything. Yet upon further examination, in the interstices of my melancholy, I could see that many good things happened in the past year. They mostly had to do with derby, and also in the area of friendships and personal growth, and, naturally, many of those overlapped. 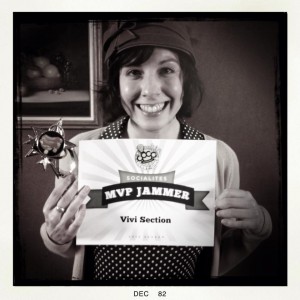 Photo courtesy of Junior / How could I hate a year when this happened?

I really enjoyed our competitive season and felt like I gained some maturity as a skater. My league voted me MVP jammer for our A-team — how could I hate a year in which that happened?! (Honored, seriously, CCDG. xoxo) I won my first MVP jammer award for a game, I traveled to multiple states to play and serve as a turn coach for our B-team, and two of my team’s bouts were even broadcast on DNN. I had a very successful year serving on our Board and deepened my friendships with many people on my league, along with non-derby friends and coworkers. My peers elected me league president for the coming year. I became more confident in my abilities, both on and off the track. These achievements will keep me striving in the new year.

I also have derby-specific goals, which involve kicking more and better ass in 2013. Have you made any derby resolutions this year? I want to jump the apex. Not attempt to hop by a wall of four blockers and get hipchecked into the center of the track, where I am ruefully forced to call the jam. I want to octopus around blockers like Kelley Young, like it ain’t no big thing, like I’m giving them a sweet little hug before taking off out of the pack. I want to devote some time to maintaining my blocking and pivoting skills, backwards blocking, owning people with my ass, etc. I want to improve my form. I want to have a really positive attitude on the track, regardless of what happens in any game or scrimmage. I want to be a great friend and teammate, and be encouraging to others who are working on their own derby goals. I want to increase my overall fitness, eating foods that will fuel my performance in derby and cross-training by attending more Pilates, yoga and boot camp classes as well as, gulp, actually running. Kick. More. Better. Ass. 2013. This is the plan. I challenge anyone who had a shitty 2012 like I did to rededicate themselves to derby this year. It gives you back what you put into it — I know this from experience and am counting on it in the new year. Derby provides.