Warning: Declaration of Struts_Option_Select::customizer_control_options($setting_name, $priority) should be compatible with Struts_Option::customizer_control_options($setting_name, $priority = 1000) in /nfs/c04/h01/mnt/60107/domains/callthejam.com/html/wp-content/themes/duet/includes/struts/classes/struts/option/select.php on line 42
 On accepting an accolade | Call the Jam

On accepting an accolade

The last time I won a trophy it had a fish on top of it. The year was 1985 and I had managed to defend my 1984 title of children’s champion in the annual fishing contest on Lake Memphremagog in Newport, Vermont. I was quite the angler in my youth. I’m sorry to say that my two championship fishing trophies did not survive one of my many moves over the past fifteen years or so. Otherwise I’d be displaying them on my mantle along with the handmade MVP jammer trophy I won last weekend. It’s a small thing, winning an award for playing one position in one bout, and further, a post-season travel match that turned out to be a slam dunk for my team. 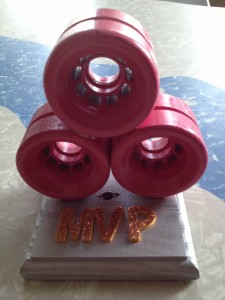 But it still means a lot to me. I’m humbled that the host team took the time to make awards for us, and that they chose me as one of the standout players for those 60 minutes we battled it out on the track. During the bout, I tried some of the skills I’ve been working on for the past couple of months, and I was not successful in executing them. But the trying was enough to make me feel like the bout was a personal success. And then to be selected for an award! That was truly an honor. I’m not one who wants others to blow sunshine up my skirt all the time, but at this stage in my life I’m finally learning to accept compliments. It’s a conscious decision that’s part of a larger campaign to be nicer to myself and it isn’t easy for me. Of course, I couldn’t do anything in derby without my team, but I accept and appreciate this nod to individual achievement. It’s a gesture that fuels my desire to keep working hard, to keep proving myself worthy of the praise I’ve been given.